After its creation, while passing through different hands throughout different periods, a painting was often subjected to changes in its appearance, due to the natural aging process but also because of human interference. Paintings were enlarged or reduced in size in order to fit into a new space or to physically match a chosen counterpart in the collection. Features in the pictorial scene were added to improve or restore the painting, or elements were removed because they were considered offending. Reproduction prints and photographs taken at earlier times are an important source for the material history of a work of art. These documents visualize what a painting looked like in the past.

The painting Lot and His Daughters, kept at the Museum Catharijneconvent in Utrecht, originally measured c. 120.6 x 171.5 cm. A large part of the right side of the canvas, depicting a landscape with the burning cities of Sodom and Gomorrah in the background, was removed between 1936 and 1937. At an auction in 1936 this painting still measured 120.6 x 171.5 cm, its original size. Once published in the exhibition catalogue of the art dealer Katz in 1937, the painting appears to have been reduced in size to its current dimensions. 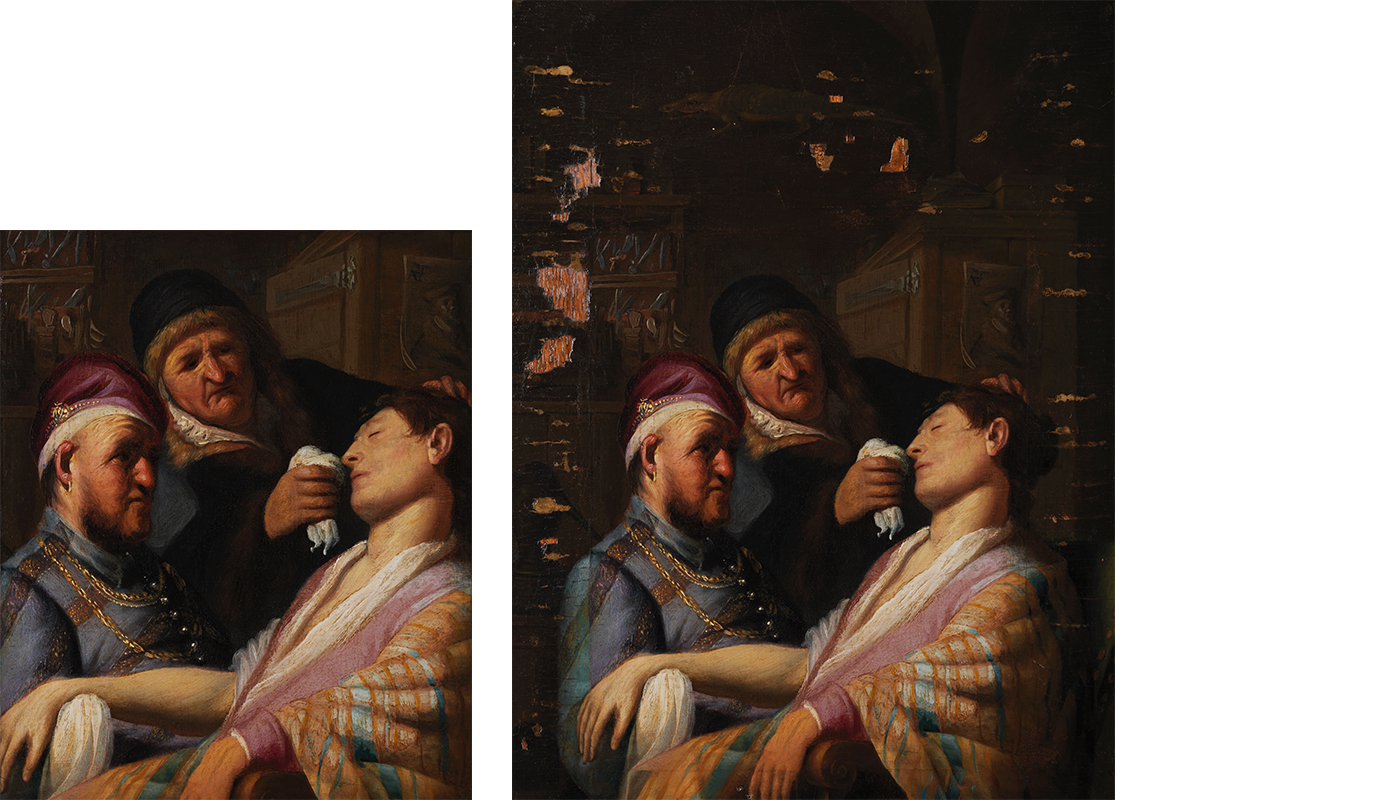 At the start of his career, Rembrandt painted a series of the five senses. Four of the five paintings are still extant. One of the panels – the Allegory of Sight (The Spectacles Seller) is at the Museum De Lakenhal in Leiden; the others are part of The Leiden Collection in New York. It is unknown when the series was dispersed. However, they were likely all still together in the eighteenth century, when the original panels from the series were set into larger panels, enlarging them to approximately 31.7 x 25.4 cm. The eighteenth-century dating of the enlargement is based on the study of the pigments of the overpaint and on measuring the annual tree rings of the additional panels. In the case of three of the panels the additions were removed during treatment of the paintings in 1987-88. For the Allegory of Smell (The Unconscious Patient), discovered in 2015, it was decided to maintain the enlargement but to cover it with a frame.

Rembrandt’s painting Simeon’s Song of Praise was bought at auction in 1733 by the painter Philip van Dijk, presumably acting on behalf of Willem Carel Hendrik Friso of Nassau (Stadholder of Friesland and later Stadholder Willem IV). The picture was hung at the Palace Het Loo in Apeldoorn. To fit the fashionable eighteenth-century installation style in the Palace, the upper corners of the painting were rounded off and an arched top was added. Rembrandt’s painting thus formed an ensemble with the painting Young Mother by Gerrit Dou with its original semi-circular top. In the auction catalogue of 1733, the painting is still described as measuring 62.2 x 48.8 cm. In the royal inventory drawn up in 1757/1763 its dimensions were increased to 78.5 x 52.5 cm. In 1983 the painting was restored and the addition with the arched top was removed.

Soon after its completion, Rembrandt’s Self Portrait, now in The Leiden Collection in New York, was almost entirely overpainted by another artist. Hair, headdress, facial hair, clothing; nearly the entire painting was changed, transforming the Self Portrait into an almost tronie-like image. In 1995 a scientific examination was conducted on the painting by the Rembrandt Research Project. Their analyses showed that the overpaint was very old, possibly even applied while the painting was still in Rembrandt’s studio. During multiple interventions around 1950 and in 1980 much of the overpainting had already been removed. That is why it was decided to remove the remaining overpaint as well, during the treatment in 2000. 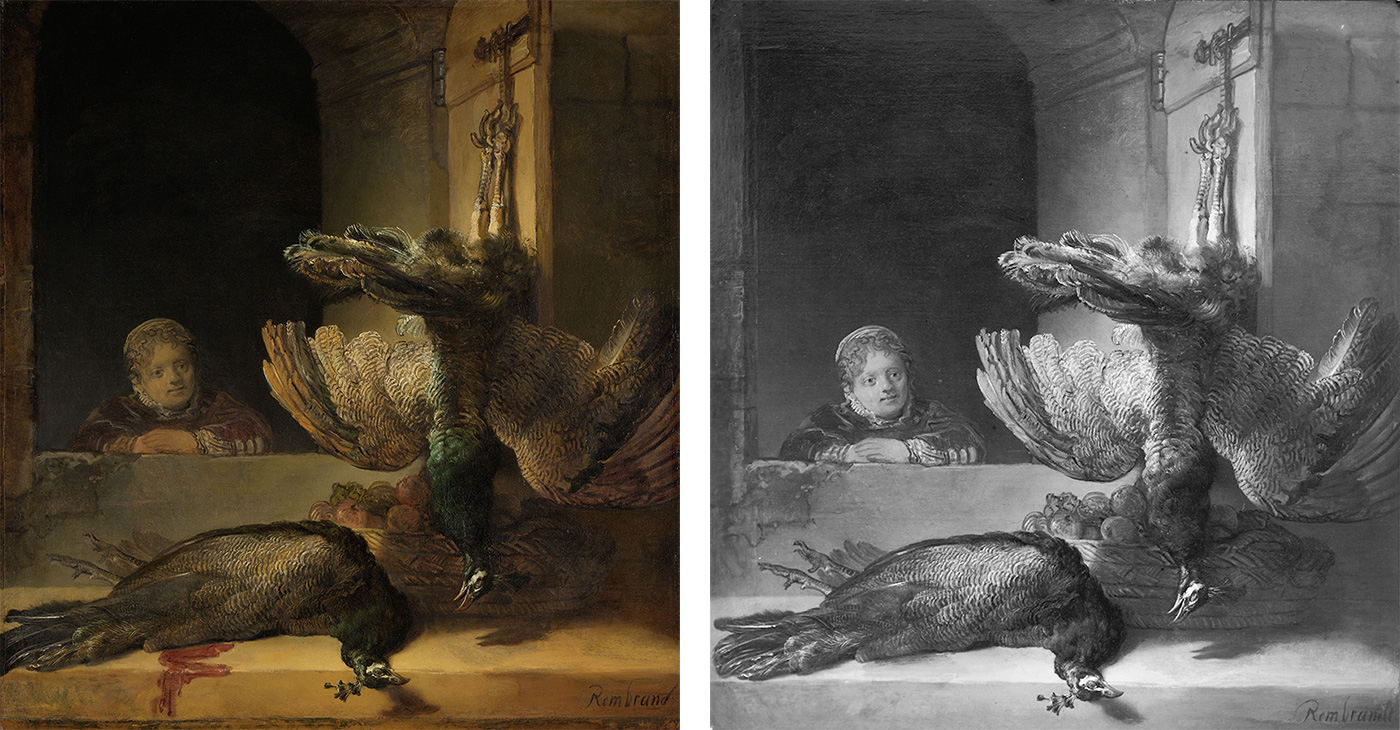 One of the former owners of the Still Life with Peacocks, now in the collection of the Rijksmuseum in Amsterdam, had the painting’s appearance altered. Apparently, the puddle of blood below the dead peacock on the left was found disturbing for more delicate sensibilities, and as a result this section was painted over. During the treatment in 1937 by Hendricus Hubertus Mertens this overpaint was removed, and the pool of blood was uncovered.

Changes to the appearance of a painting can provide insight into the appreciation, the use, the treatment history or even the physical location of a painting. In treatments, conservators often try to restore the artist’s original creation, removing or adjusting any changes made in the past. Earlier imagery such as old photographs are an indispensable source for art historians and conservators as they can hold key information to the material history of a painting.